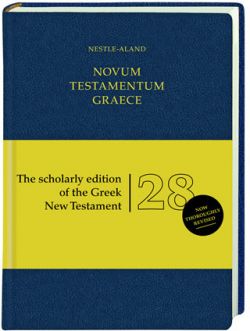 Following intensive preparatory work, the new edition of the Novum Testamentum
Graece (»Nestle-Aland« or »NA28«) is now being published. Thus this standard and globally preeminent reference among Greek New Testament editions is available in a fundamentally revised and improved edition. One focus of the revision was on the critical apparatus whose structure was simplified. For instance, the combination of variants using »sed« or »et« and the distinction between consistently cited witnesses of the first and second order have now been removed. In addition, the readings of the newly discovered Papyri 117-127 are listed for the first time, opening up interesting perspectives particularly for the Acts of the Apostles. In the Catholic Epistles, this edition has been made consistent with the »Editio Critica Maior«. This led to more than 30 modifications in the main text and resulted in a critical apparatus which is newly compiled in its entirety for this section and includes a new selection of witnesses and variants. The cross-references in the margin were also systematically revised and supplemented mainly with references to early Jewish literature.

The standard edition of the Greek New Testament extensively revised

The structure of the critical apparatus consistently simplified

For the first time with the readings of Papyri 117-127

The cross-references systematically revised and supplemented